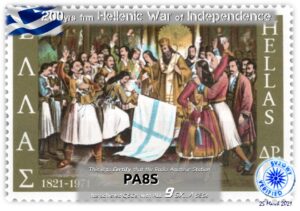 Starting on 16 December 2020 a group of Greek radio amateur stations will be on the air to commemorate the 200th anniversary of the Hellenic War of Independence in 1821. Nine multi-operator special event stations – namely SX1A, SX2A, SX3A, SX4A, SX5A (Dodecanese), SX6A, SX7A, SX8A and SX9A (Crete) – will be active during the countdown to the 200th anniversary of the “Agonas” (the Struggle), the Greek Revolution of 1821 which led to the formation of modern Greece.

The countdown will start at 99 days before the actual celebration day, i.e. 25th of March 2021, the Celebration of the Greek Revolution of 1821 or less commonly known as the Greek Independence Day. The stations were QRV on the dates in the table below, also shown are the bands on which I’ve made one or more QSOs with any of these stations.