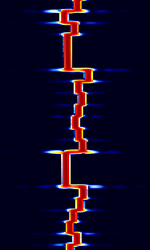 On LF up to the lower part of UHF, i.e. between 2200m and 70cm, the following frequencies are often used by various digital modes. These can be subjected to change, by the creators of the modes, by the community or by regulation.

The frequencies for FST4, FST4W, FT4, FT8, JS8, JT65 and JT9 are chosen by the developers of their respective modes but are not set in stone. For MFSK, PSK and RTTY these are advised frequencies. The FT8 frequencies on 6 meter are (unofficially) split in continental (50.313) and intercontinental (50.323) DX. This being said, these frequencies should be read as CoA frequencies

The frequencies in the table are in MHz.

If you see an error, please contact me so it can be corrected. You can also contact me if you have additional information.