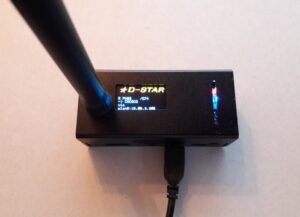 Since I have both DMR and D-STAR compatible portables, I have been playing a bit with these modes. I can see the advantages of these modes but the configuration possibilities and the additional problems seem almost infinite. 😉 In order to play with DMR/D-STAR in my shack I bought an MMDVM HS Hat. This is a module that I've mounted on a Raspberry Pi Zero-W to create a compact hotspot.

I was able to connect to a local DMR repeater but unfortunately a fire, not related to the repeater, started a while ago at that location so the repeater is now powerless and inoperable for some time. A DV hotspot was already on my shopping list but due to the loss of the repeater it was a good opportunity to order one.

On the software site of things I use the Raspberry Pi OS distribution with the Pi-Star software suite to communicate to the MMDVM HS Hat and the D-STAR/DMR networks. Now it is important to configure both DMR and D-STAR properly on the hotspot and let both portables connect to it. The D-STAR connection I already managed, it was easier than I thought. The DMR connection did not work right out the box. Or at least, I assumed a BrandMeister API was not necessary for local operation. I was wrong and with the API key configured in Pi-Star I was also connected to the BrandMeister network and could use my DMR portable on my hotspot.

The hotspot is a nice compact device but with a design flaw in my opinion. Knowing that it is usually placed on a Raspberry Pi, with the power connection at a known location, I think that the screen should have been rotated 180 degrees.This would make it easier to place the hotspot on its side and still keep the screen readable. In addition, the antenna connection could also be placed slightly differently, although this can be solved by using an antenna with a 90 degree connection.